Home Uncategorized up, up my friends! or the tables turned. or, what can your computer teach you about poetry?

up, up my friends! or the tables turned. or, what can your computer teach you about poetry? 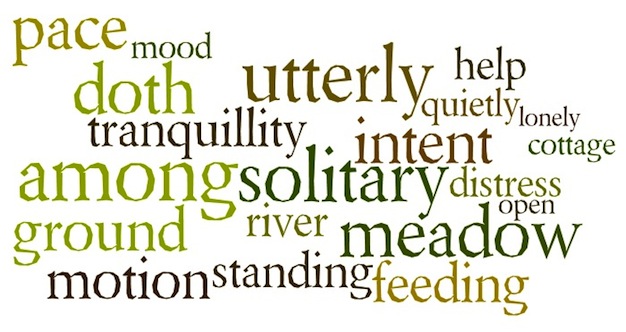 As we discussed text-mining and textual analysis earlier this semester and considered what kinds of  new frameworks can be generated through digital methods, one of the examples we looked at is a wordset generated by Ted Underwood, of “words that are consistently more common in works by William Wordwoth than in other poets from 1780 to 1850.” The odds of a single scholar deriving this list are likely slim to none (and slim just left town), and even an extensive team of scholars managing this feat without computational power is highly unlikely.

In visualizing the list Underwood used Wordle’s graphic capability but the wordlist itself is comprised of words that “have been selected by a Mann-Whitney test, which measures overrepresentation relative to a context,” a meaningful exploration that Wordle’s context-free method doesn’t allow for. (For Underwood’s discussion of what kind of results can be generated through text mining, the corpus he created of  818 volumes of poetry and fiction between 1780 and 1859 which includes 243 authors, and the R script he used for the Wordsworth wordlist, see “Where to start with text mining.” [8.14.2012] at his blog, The Stone and the Shell: Using large digital libraries to advance literary history.

Curious about what would happen if we played with Wordsworth’s literary fingerprints, a few of us gave the following experiment a trial run: What would poems we created using the Wordsworth wordlist look like today? Would they be clearly Wordsworthian? Would they diverge in culturally significant ways? Would multiple versions be recognizably comparable in tone, or cadence, or themes, or other characteristics with Wordsworth and/or with each other? By constraining ourselves to Wordsworth’s own word signatures, how might this impact the creative act of making a poem? In what ways might this explicit constraint make more plain the process of remixing that happens as we create something “new” by (subconsciously?) drawing on that which already exists in other instances? What methods might we use next to digitally analyze the poems we created non-digitally when constrained by a digitally-derived lexicon?

The exercise was intended both as a form of play, and as a prelude to further scholarly investigation. Where next? We’ll detail further steps here in a follow-up blog post, and be gathering our examples on a separate site (to come soon).

Would you like to add a poem? We’d love to have more, so feel free to send one if you would like to play with the Wordsworth wordlist! [Now I’m having an ’80s flashback to Tom-Tom Club’s “Wordy Rappinghood”. William is probably turning over in his grave.] If you’d like not to be influenced by our attempts, do your poem first then come back and look at ours.

For right now, links to other poems are: here and here.

My own poem follows below.

sunlight splayed through double-leaves passed right then right to reach the end.

Once-upon-a-times touched by the tranquillity

Kitsch and kin, thee and thine, and how doth the restless moon-curve glow?

Pages turned and turned once more

Gone to ground and standing fast

Curiosity’s unclaimed distress that hopes when help is past.

Rivers wider than eyes can reach to touch the other side.